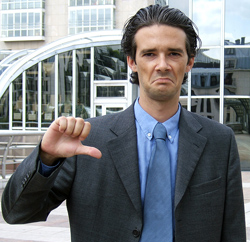 One of the worse things you can do for your business is lose credibility. It can be done in so many ways. Today I’m going to talk about how being a Twitter spammer will do it in a heartbeat. First off, no one likes a spammer. Period. Remember when email used to be cool? We loved hearing, “you’ve got mail!” I miss that warm, fuzzy feeling when my computer said that. Well my friend, those days are long gone.

When I first got on Twitter back in March 2008, it was so cool. It was mostly overrun with techies, and we liked it that way. Then CNN, Ashton Kutcher and Ellen Degeneres came along and made it mainstream. I thought that was cool until it became saturated with marketers trying to sell us their sh*t. Spammers are out of control. DM’s are about 90% crap. I’ve been getting bombarded lately by Twitter spammers. And you know what? They suck and I’m getting irritated with it.

Today I’ve been getting blitzed by spammers for @talenthouselive as well as a few other individuals promoting services they are affiliated with. 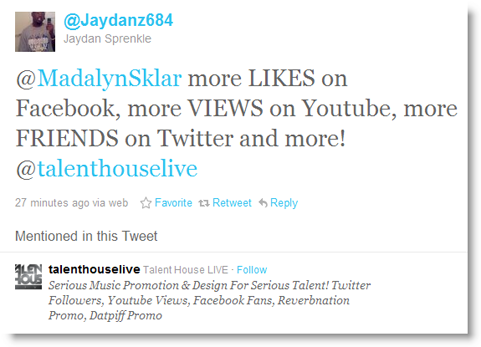 This afternoon I received these at my @GoGirls and @MadalynSklar Twitters. Annoying! This particular one was in response to a Twitter conversation I was having with @ReverbNation. It’s obvious they are following keyword conversations, then pouncing on us thinking we are ripe for selling. Wrong! I promptly replied with the following message.

It did the trick. 30 minutes later they removed their annoying post from my feed. Uh, thank you!

I’m not going to pick on this one company because plenty others are doing it. This one below comes from a smarty who posted on my feed 2 weeks ago. I got quite a few of these. One is okay. Yes, nicely tell me about your service. But don’t f*cking bombard me! I just love how she (and I’m sure this is a fake account) spammed me with her referral URL. Oh yeah, I definitely want to run out and use @Bandromeda when I’m 1) being bombarded by them and/or their affiliates and 2) see the referral URL. Sadly, I like this company and their service but they should send out do’s and don’ts to their affiliate marketers. This would be a big fat don’t!

Okay that’s it for my rant today. Are you having problems with Twitter spammers? Tell me about it. How are you dealing with it?

Update 5-6-11, about an hour after I posted this article: I started to publicly thank @talenthouselive on my Twitter for removing their annoying spam. But I took a quick look at the Twitter Search for their @mentions. Basically I put in @talenthouselive in the search box. Wow, take a look. Hundreds of spam messages every minute. They’re obviously using a bot. Is this the way you want to be marketed to?