I think hashtags are best when used for live chats. I host a weekly Twitter chat for my GoGirlsMusic.com community every Thursday evening at 9pm ET/6pm PT. We use the hashtag #ggchat.

As you can see in the tweet below, the hashtag is placed at the end of the post. Technically a hashtag can be placed anywhere but it’s common to place it at the end. When it’s clicked, it will take you to all recent tweets using that hashtag. It’s a great way to share information or a common interest.

The easiest way to participate in a live Twitter Chat is with TweetChat. It’s a free site that manages it for you. You simply type in the hashtag and log into your Twitter. It moves in almost real-time (10 second delay but can be adjusted to 5 seconds) and allows you to watch a chat unfold. If you choose to tweet, it will automatically place the hashtag at the end of your post. It makes it completely simple for you.

if you use twitter, make sure to follow the Folk Alliance conference ongoings with the hashtag #FAI12 -you’ll be glad you did.

A cool way to connect with people during your favorite TV show is following the designated hashtag. It’s usually the name of the show. If you’re not sure, Google it or search Twitter. Many times a show will have a dedicated Twitter account and will post their hashtag there. If not, check the network channel’s Twitter. I like watching NY Ink on TLC every Thursday night. The hashtag is #NYink. If you search this keyword at any given time, you’ll see people talking about the show. But when you search it during the show’s airing, it will be consumed with tweet after tweet, by the second. I love this because as things unfold on a show, you can converse with people as it happens! It’s really cool and fun. I do this with Hootsuite on my iPhone. 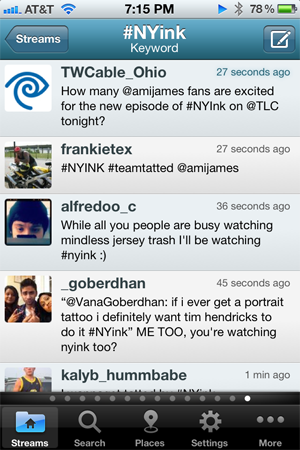 So there you have it, a simple breakdown on how hashtags work. They can open up your Twitter world to much more valuable information and resources. And if you dare, you can learn even more about hashtags here.