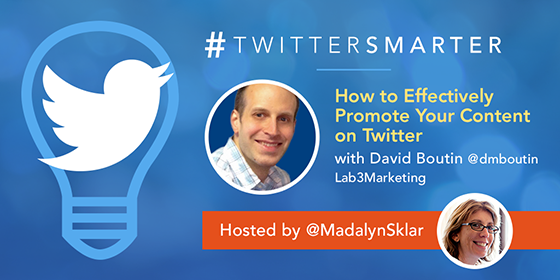 We’ve all heard the sentiment‘Content is King’ but what is less talked about is how to go about promoting this content after it’s been created. Certainly, there are many different outlets for sharing content, but here on the #TwitterSmarter chat, we’re particularly biased toward Twitter – our favorite platform. When it comes to social media in general and Twitter in particular, sharing isn’t alway caring. Sharing has to be done right for it to be meaningful and effective. The 5 ‘W’s (and the ‘H’) definitely come to mind – What, When, Where, Why, Who, How.

In the last chat David Boutin of Lab3 Marketing joined us with some very valuable insight on content sharing for Twitter. We talked about Twitter Cards, scheduling tools for sharing and repurposing content, among other things. The main take away was that it’s important to have a schedule for sharing as well as to get creative when repurposing content for repeat sharing. We also spoke about the best way to get an influencer to share content.

Continue reading below to get more details on the various questions and some of the more insightful and popular responses from the chat.

Be sure to join us every Thursday on Twitter at 1pm ET | 10am PT for awesome and actionable advice on how to  #TwitterSmarter.

SUMMARY OF RESPONSES: With the help of hashtags and the formation of communities around interests, Twitter is a great platform for connecting with your target audience. And the tweeters are awesome 🙂

A1: The power of hashtags really helps you get your content in front of people you wouldn’t normally reach #twittersmarter

A1: I love Twitter for sharing content. I think we have a better audience here. More like-minded people in our tribe. #TwitterSmarter

A1) 140 characters forces you to be concise and make an impression. It’s also very fluid and connections are fast. #twittersmarter

A1 Twitter has an incredible ability to bring communities together. You can find the “home” of you target audience #twittersmarter

SUMMARY OF RESPONSES: A social media calendar is great for strategy – for identifying, organizing and scheduling content and other relevant tasks.

A2) A SM calendar breaks down monthly, weekly and daily tasks and provides a road map for a consistent brand message #TwitterSmarter

A2: Fail to plan. Plan to fail. Life is busy and Social Media Calendars assures life doesn’t get in the way. #twittersmarter

3. Why is it so important to use images to promote your content?

SUMMARY OF RESPONSES: Images grab attention. They make your content stand out and give more room for expression beyond the 140 characters.

A3 Visuals are great way to get ppls attention. Speed bumps when you’re scrolling through feeds. 😉 #TwitterSmarter https://t.co/PQuwjfh9wj

A3: Images speak volumes. With our 140 characters I recommend posting 1-4 images in each promo tweet #TwitterSmarter https://t.co/AswoLnvOil

A3: Images speak to our eyes, hearts, minds, souls. Oh and stats show the engagement is higher. #datawins @MadalynSklar #TwitterSmarter

4. What tools do you use to find relevant hashtags to complement your content?

SUMMARY OF RESPONSES: Turns out, Hashtagify is the crowd favorite.

A4) Tip – tools may not tell you how a hashtag is being used so investigate first, e.g. is #Engagement for SM or weddings? #TwitterSmarter

A4) http://t.co/jRIQtSkYWY Look at my twitter feed for what’s trending. Pay attention to tags used by those I follow. #twittersmarter

A4) Some interesting stats on hashtags from @buffer – don’t go crazy! #TwitterSmarter pic.twitter.com/gUOtHZHK2G

A4: Once you identify your hashtags, use Advanced Twitter Search. Go here: http://t.co/P1XEC8vuXw #TwitterSmarter https://t.co/iPNuxgIAV3

5. How do you promote the same content in different ways to keep tweets fresh?

A5) Try switching up your wording; it may actually help to see what “headlines” are more effective and use that in future. #twittersmarter

A5: When sharing the same content pull different quotes from that content to see what resonates better with your community #twittersmarter

@MadalynSklar A5: Change up the copy, swap the image, add a short video, or pin the Tweet. #TwitterSmarter

SUMMARY OF RESPONSES: They are very effective visually. They share content in a neat and tidy way that is visually appealling and uniformed.

A6: Best adv is that you set it up once & you can feel confident that your content will look like you want it to when shared #twittersmarter

SUMMARY OF RESPONSES: Engage with influencers by retweeting, favoriting and sharing their content, commenting on their blog posts, and above all make sure your content is relevant and useful.

A7) Make connections w/influencers through RTs, mentions, blog comments, then share with them content you know they’ll love #TwitterSmarter

A7: I RT, reply, favorite, converse. I share their articles. And I join Twitter chats. #TwitterSmarter https://t.co/PTI0jybpMd

Before you ask anyone for help, be helpful first! Share, comment, engage – show you care! #TwitterSmarter https://t.co/OTZmwWF6QW

SUMMARY OF RESPONSES: This should only be done sparingly, when it’s relevant and useful. Anything else will come across as spam.

A8 Yes, if the person who owns the Twitter chat wants you to AND what you share is highly relevant / on topic @MadalynSklar #TwitterSmarter

A8) Depends on if it’s relevant. If I have a question and your content answers it for me, please share #twittersmarter

A8 If the content is 100% relevant to the chat! And sparingly. Chats are there for learning not self promotion #twittersmarter

A8: If it’s relevant to the chat. But not spammy!! #twittersmarter

As always, we had a great time and the hour seemed too short.

For more tips, advice and resources to help you master Twitter and grow your business be sure to follow @MadalynSklar and join us every Thursday on Twitter at 1pm ET | 10am PT for  #TwitterSmarter.

As a freelance copywriter, Anna eats, breathes and dreams up story-centric copy for her clients at www.focusonthestory.com. Otherwise she likes to spend time drooling over other people’s well-crafted sentences. She’s also passionate about forming connections, social media and branding. Say hi to her on Twitter!