I predicted this was coming and now it’s quietly being rolled out. Are you ready for this? Twitter Live (that’s what I’m calling it) is here! Just like Facebook Live, you can broadcast live video with the click of a button. It’s currently available to iOS and Android users. No word when the rollout will be complete and if it’s going to make its way to desktop.

The rollout has been quiet with very few making a mention about it. There’s no official news or mention anywhere in sight from Twitter.

You may recall earlier this year Twitter took steps to integrate live Periscope broadcasts into Twitter profiles and streams. And last month a select few Android users saw a new Live button (next to photo and video) that was added in when composing a tweet. The Live button allows you to broadcast on Periscope directly from Twitter.

It’s okay if you don’t have Periscope installed on your phone yet. This rollout is coming to all Twitter app users. You’ll get the “Live” button and then get prompted to download Periscope.

With the popularity of Facebook Live it comes as no surprise that Twitter would go the same route and introduce Twitter Live to everyone in the form of Periscope. Twitter acquired the livestream company just as things were heating up with once popular Meerkat.

Do you have the new Twitter Live? What are your thoughts? Will you be more inclined to use Periscope with it embedded in Twitter? Share your thoughts below. I’m listening. 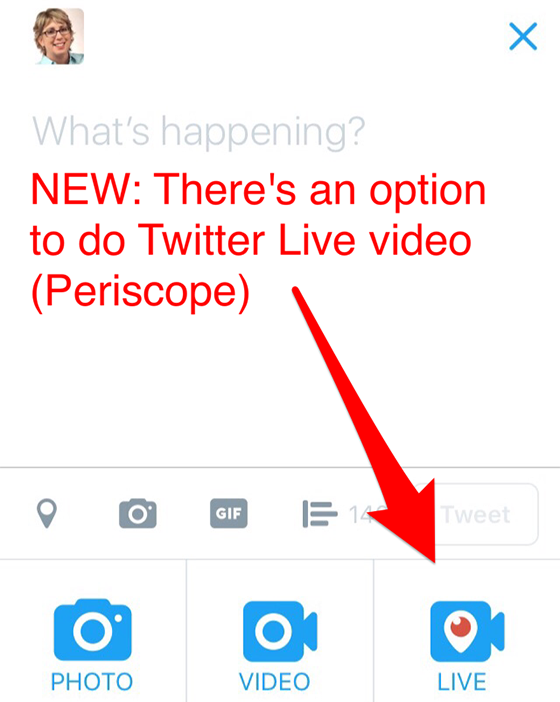