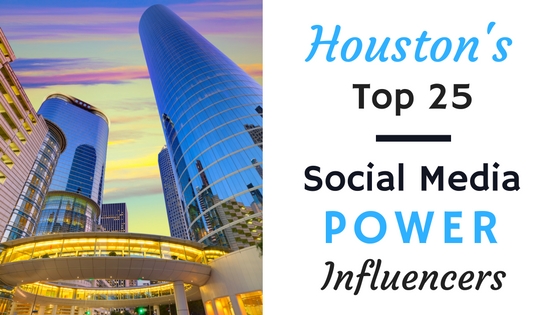 It’s pretty cool that Houston, the 4th largest city in the US, was ranked by Forbes a few years ago as one of the “coolest” cities to live in. So it comes as no surprise that we are home to some of the coolest people in the social media marketing world.

Did you know our city is filled with top ranking Twitter chats and amazing hosts?

This social media list was started by Eric Tung. In 2013 he went on a mission to uncover and spotlight the top social media influencers after an article in Forbes listing the top 50 social media power influencers failed to mention one person in Houston. So this list was born.

The Methodology
I researched influencers from Eric’s past social media lists and I conducted my own search to find those who fit the bill. These are people in the Houston area who are working in social media day in and day out. Eric details the qualifications in an older post.

I looked up the score for each influencer in Klout, Kred and FollowerWonk. These tools are similar in ranking social influence and authority, but they approach it a bit differently. I believe this makes for a good, solid overall ranking.

I used Eric’s previous methodology where he subtracted each influencer’s ranking on the list from 140. That way, even if you ranked last in one metric, you still got points for it. If you ranked first, you got 139.

I ranked everyone by their raw score.

Here are the Houston Top 25 Social Media Power Influencers for 2017:

2. Eric Tung is the Digital Director at GoTo Marketers, and is a speaker and blogger. @EricTTung

3. Anh Nguyen is the President of Amplified Marketing and the host of #MobileChat. @AnhTNguyen

4. Kami Watson Huyse is the CEO at Zoetica Media and founder of the Social Media Breakfast in Houston. @KamiChat

5. Cheval John is a blogger, social media strategist, and host of What’s the Word on Blogtalk Radio. @chevd80

8. Chris Makara is an Interactive Marketing Specialist at Insperity and founder of Bulk.ly. @ChrisMakara

9. Portia Chandler is a Digital Strategist for church leaders and non-profit organizations. @AskPortia

11. Bobbie Byrd is the co-founder of the Blog Elevated conference and #BlogElevated chat, blogger and social media consultant. @clumsycrafter

12. Michele Price is a Fractional CMO, Host and Broadcaster at Breakthrough Radio, and Managing Director at Startup Grind – Houston. @ProsperityGal

13. Juan Alanis is the Public Relations Director at Big Oak Tree Media and the Founder and Content Creator at Hispanic lifestyle blog, Juan of Words. @JuanOfWords

15. Kathy Penney is a blogger on inspired family living through creativity and travel. @KathPenney

16. Lisa Stauber is a Digital Entrepreneur, Social Strategist, and Founder of the Blog Elevated conference. @Lisa_Stauber

19. Ken Watson is a Social Media Consultant and host of the new Twitter chat, #ChatGram, focusing on Instagram. @WatsonKS

20. Rebecca Councill is a Social Media and Evernote Certified Consultant and Co-Founder of the Social Media Association of Houston. @RebCouncill

23. Sandy Lawrence is is a publicist, an International speaker, International bestselling author and creator of DIY PR programs. @SandyLawrence

24. Scylla Lopez is a Digital Producer at ABC 13 and a Social Media Marketer. @ScyllaLopez

Think you should be on this list?
If you have all three of these: a Klout score of 55 or higher, Kred 700 or higher, and FollowerWonk 50 or higher please fill out our contact form here. We’ll check your ranking to see if you qualify for a future listing. Thanks.