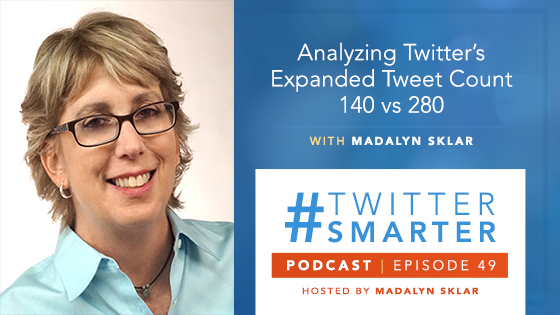 This podcast episode is brought to you by audible – get a FREE audiobook download and 30 day free trial. I recommend Dorie Clark’s new book, Entrepreneurial You. I just finished it and have to say, it’s awesome!

In this brief, solo episode (yeah, it’s just me) I share my thoughts on the new expanded tweets. It’s an excerpt from my recent post, What Will Happen To Twitter’s Brevity With Expanded Tweet Count?

I’d love to know your thoughts about this big change to Twitter. Feel free to comment at the bottom of the page.

It’s official. Twitter has expanded its character length from 140 to 280 characters.

Twitter decided to go ahead and roll out longer tweets on November 7. They did this everywhere except for those using Japanese, Korean and Chinese, because character length is not an issue for those languages.

Twitter says it’s easier to tweet when given more space. And that with more room to tweet, there’s room for higher engagement, more followers and more time spent on the platform. That remains to be seen.

I was granted access to Twitter’s new update right in the middle of the #SocialROI chat that I host every Tuesday at 5pm ET. I watched some participants post tweets that were definitely longer. I didn’t like it. It seems odd and out of place. Especially during a fast-paced chat. It’s hard enough to keep up, but now trying to wade through longer tweets would become nightmare. Luckily only a few people tried longer form tweets during that chat.

Later that evening, I experimented. I tried a few longer tweets. At first it seemed weird. But what was even weirder is that Twitter does not give you the number of character spaces at the onset. As a matter of fact, you don’t know how many characters you’ve tweeted until you come upon the last 20 out of 280 characters. I found myself easily typing up longer tweets. Was this a ploy to get us to write out longer thoughts? Hmm, I wondered.

So it didn’t take long. A few nights ago I was busy prepping and promoting the #TwitterSmarter chat that I host every Thursday at 1pm ET. I came up with a really great tweet. I got creative with the space. It’s more compelling and attention grabbing. Check this out.

Join me & @CraigCarpenter on the #TwitterSmarter chat Thursday 1pm ET. Topic: How to Turn Tweets Into Visual Content That “Wins The Feed”

What Will Happen To Brevity?

Twitter’s best asset is its brevity. Sharing concise information is what drew me to Twitter, as I’m sure most of you. But I can also see beyond the 140 and that this change is not so bad after all. There will be times where we need that extra character space, or two or ten. But I am worried about spammers being more spammy. And Twitter chats being difficult to wade through. Twitter says that the excitement should wear off soon and people will go back to the concise. It will be interesting to see what happens.

What Does This Mean For You?

More space which gives you room to be creative. You can now share an expanded thought on Twitter and go far beyond what you were used to with just 140 characters. Many are on the fence about this new move, as I was. But as I spent more time experimenting, I realized there will be times where some extra space will come in handy.

I posted a Twitter poll to get an idea as to what people in my community thought about this major change. In just 24 hours, I received 566 votes! The results are quite interesting.

What do you think about the new Twitter 280 character limit?
(and please comment your expanded response, I’ll be writing a blog post about it and would love to include you)

I sorted through 100 comments and found interesting commentary that covers every angle.

What My Community Says…

Mixed feelings. Confortable to not have to squeeze your message sometimes. But 140 makes it quicker & easier to read. Straighter to the point.

A small increase would have been OK. Jumping up to 280 seems unnecessary. Not a fan.

Not sure… My first reaction is “hate it” because I always loved the main purpose of Twitter (being quick and relevant in 140 characters) and I hope I won’t have to read super long tweets from now on – On the other hand, there’s more room for your thoughts, like I’m doing now ?

Brevity is the beauty of Twitter; people are encouraged to be creative/grammatical with #140.

The joy of Twitter was info & humour + brevity. Life is too short for long tweets

I did some research & it claimed the avg tweet length was 34 chars. I expect people will play with 280 a bit, then settle back to normal.

It’s lost its brevity, that’s for sure. I’m on the fence. I’m not excited about it but I’m trying to find ways to use it properly so I’m not spamming out a lot of useless info.

Your call-to-action for this episode is to experiment with your tweets. Try posting longer ones. See what the fuss is about! Send me a tweet @MadalynSklar and let me know what you think of it. I want to hear from you!

The Secret Sauce to Boosting Your Twitter Presence
In just half an hour you’ll be empowered with tips and ideas on how you can boost your presence on Twitter.

Shout Out to My Patrons!

I want to answer your questions about Twitter. Leave me a voicemail at MadalynSklar.com/speakpipe and I will pick a few to answer on the show. Don’t be shy. I want to hear from you.

Want an easy “one-click” way to Share Your Love for this podcast? Go here: www.madalynsklar.com/love to tweet out your love.

Thanks For Your Attention!

I appreciate you listening to this podcast, and would be extremely grateful if you would take a moment to rate & review it on iTunes. By doing this, more people will be able to benefit from the tips and tools shared in this #TwitterSmarter podcast series. Please also subscribe to this podcast while you’re there. It will ensure you don’t miss an episode!

I read every review that comes in, so please know that you have my sincere thanks! Not sure how to rate & review a podcast? Click here to learn how.

Audible
Get a FREE audiobook download and 30 day free trial when you sign up for Audible. I just listened to Dorie Clark’s brand new book, Entrepreneurial You, and highly recommend it. She was our guest in the last podcast, episode #48.

Join me on Patreon
Help keep this podcast ad-free by supporting it on Patreon. You can support me and the show and join the community for as little as $1/month. Every bit counts! As a supporter you’ll get rewarded with perks such as early access to the episodes and bonus content from my expert guests. I’ll be holding monthly tutorial sessions with Q&A where you can ask me anything about Twitter and I will teach you, hands on!

#TwitterSmarter Twitter Chat:
Join our weekly Twitter chat where you go to learn and share Twitter tips. It’s every Thursday at 1pm ET/10am PT. We’ll also have Q&A’s with guests from the #TwitterSmarter podcast. Mark your calendar. You don’t want to miss this!

Most Recent Reviews on iTunes