Initially launched in late 2017, it’s surprising that so many Twitter users still aren’t taking full advantage of Twitter threads. If you aren’t familiar with this feature, it essentially allows you to create a connected stream of tweets. So, you can post one initial tweet and then add onto it right then and there or even a day, a week, or a month later. With threads, your Twitter community can easily follow along with the conversation.

Twitter gives you the ability to add up to 25 tweets in a single thread. And each tweet in that thread can feature images, GIFs, polls, etc. just like a standard tweet does. It’s a great way to expand on a conversation and it can even help get older tweets noticed if you create a thread out of one later on. This way, they won’t have such a short lifespan!

Now that you know a little bit about Twitter threads, you might be wondering how to create one of your own and what kind of content you should include in a thread. This post has all the details to help you get started!

The first thing we need to do is discuss how to actually create Twitter threads. It’s incredibly simple, but it’s something that many people still have questions about. To make it easy for you, I’m breaking it down step-by-step so you can create your first thread.

You can either watch the video above or follow along with the written steps below. Whichever you prefer! Once you’ve learned how to make your own Twitter threads, you’ll use this feature all the time.

1. Come Up With an Idea for Your Thread

A great Twitter thread has a purpose behind it, right? Think about what you’d like to create a thread on so you know what kind of content you’ll be sharing. I have some ideas for you later in this post if you’re unsure of how you’ll take advantage of this feature. As mentioned before, Twitter threads can include tweets with just text, links, images, GIFs, polls, etc. You can really get creative here, so don’t be afraid to experiment and try different things.

Now, it’s time to start creating your thread! You’ll do this by writing the very first tweet that will show in the thread, which is what people will see initially. Make this tweet a good one that leaves people wanting more. If that first tweet is rather lackluster, do you think people will be inclined to click the “Show this thread” button? Probably not!

Think about what’s going to grab the attention of your audience. And not only that, but you’ll have to consider what will hold their attention throughout the entire thread you’re creating. Otherwise, you’ll risk them clicking away without engaging with your tweets.

3. Start Adding Tweets to the Thread

From there, you can add as many tweets as you like to your Twitter threads. In fact, you can add up to 25! All you need to do is click the plus sign that’s located on the lower right-hand side of the box where you’ll compose your tweet. The same applies whether you’re using Twitter on your desktop or using the official Twitter mobile app. 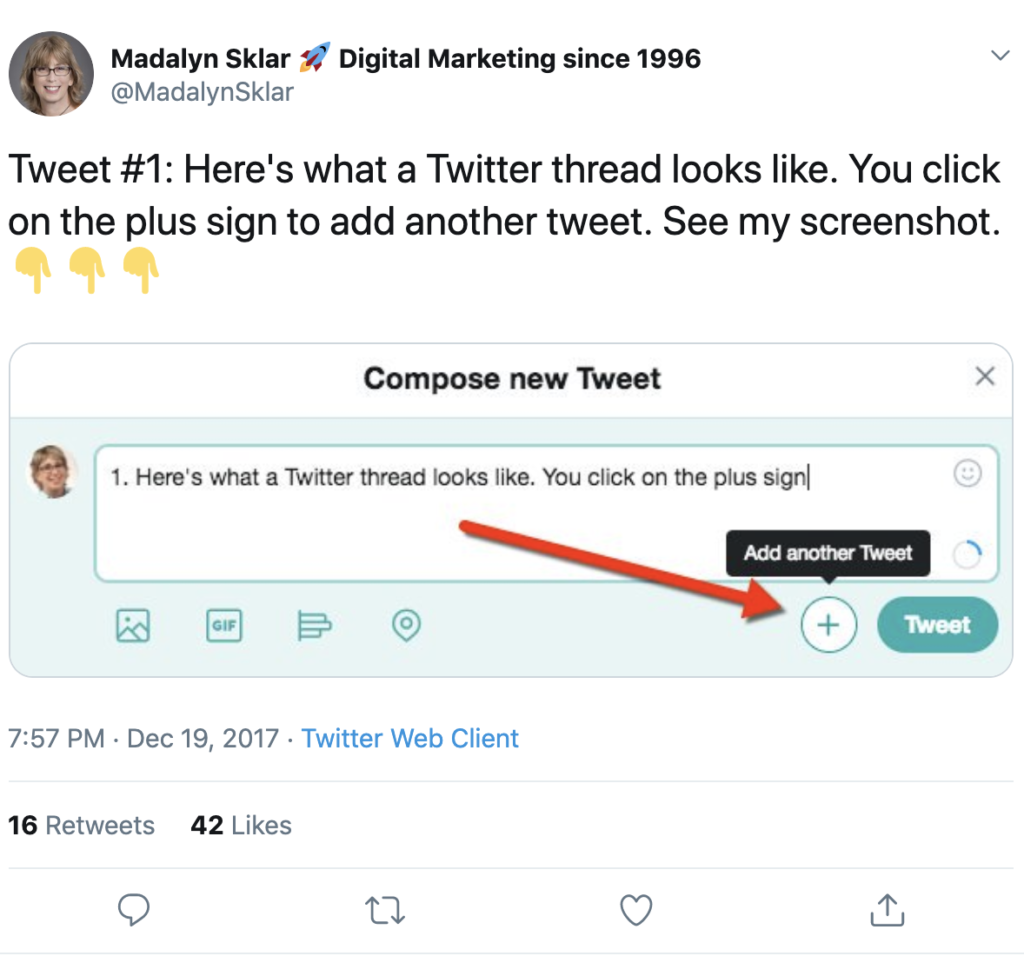 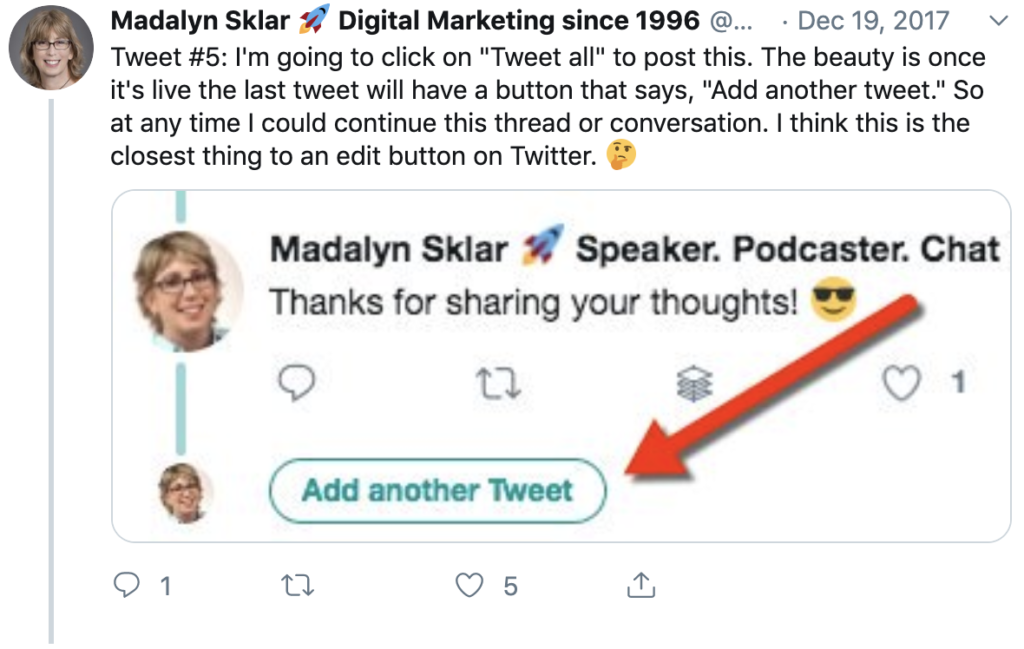 However, if you realize there’s something you forgot to say or you think of something you want to add, you can do that too. At the bottom of your Twitter threads, you’ll see the option to “Add another Tweet” should you ever need it. You can even utilize this as an edit feature if there’s something you need to correct later on since Twitter has yet to deliver us an actual edit button!

And that’s all there is to it! You’ve created a thread of your own!

With this knowledge fresh in your mind, it’s time to start creating some threads. But you might be wondering, what kind of content should I share in my Twitter threads? Well, here are a few ideas to get your creative juices flowing.

1. Tell a Story to Your Audience

One of the most common ways people use a thread is to tell a story. Because stories can sometimes be long, they simply don’t fit into one tweet because of Twitter’s 280-character limit. So, the reason threads come in handy is because you’re able to easily connect multiple tweets that are part of a sequence. This way, someone who is following along doesn’t need to go searching for every subsequent tweet. Everything is right in one place!

If you have a captivating story to share that you know your audience will love, use Twitter threads to get all of your thoughts across easily and succinctly.

Do you find you’re often sharing tutorials with your audience to teach them how to do something? Why not try giving them the step-by-step details they need through Twitter threads? Each tweet in your thread can feature a single step and include any necessary images or videos to make it easy for people to follow along. Simple, but effective!

Your Twitter community follows you because they want to see great content, right? It’s the perfect place to share valuable tips and tricks that they can then use themselves. You can create a thread that’s focused on sharing tips on a specific topic, making it easy for people to follow along and consume plenty of great tidbits at once.

For example, you all know me for my advice I share about Twitter. I could create a thread with tips on increasing Twitter engagement and share one tip per tweet. This way, there’s tons of helpful advice and I can add to it whenever I want in the future.

You need to have a complete profile if you want to make a good first impression. It should be fully filled out and should clearly state who you are and what you do.https://t.co/wydHLi7n2q #TwitterSmarter #TwitterTips

I use short threads to introduce new writing, such as my pinned LinkedIn article. #TwitterSmarter pic.twitter.com/mmT78G6WhA

Do you want to get your audience excited about something that’s coming up for your brand? Maybe it’s a new product launch or an event! Whatever it may be, you can start teasing this brand new thing through a thread. Use each tweet to leave them wanting more and build off of it over time. You could share one tweet per day as you’re leading up to the big announcement.

One more way to use Twitter threads would be when participating in a Twitter chat. You can use threads to reply to chat questions with a series of answers if you find that you have a lot to say. Let’s say you’re on the #TwitterSmarter chat and you want to reply to Q1. You could write your tweet, then click on the “+” sign and add another tweet and another tweet until you’ve strung together a series of valuable answers.

This is a simple way to keep all of your answers and thoughts together, rather than having them scattered. Other chat participants will be more likely to see each part of your response this way as well. That’s important when you consider just how fast-paced a Twitter chat can be! Otherwise, people would have to actually visit your profile to see all of your responses to a single question.

If you’ve never joined a chat before and want to check it out, read my guide all about getting started with Twitter chatting.