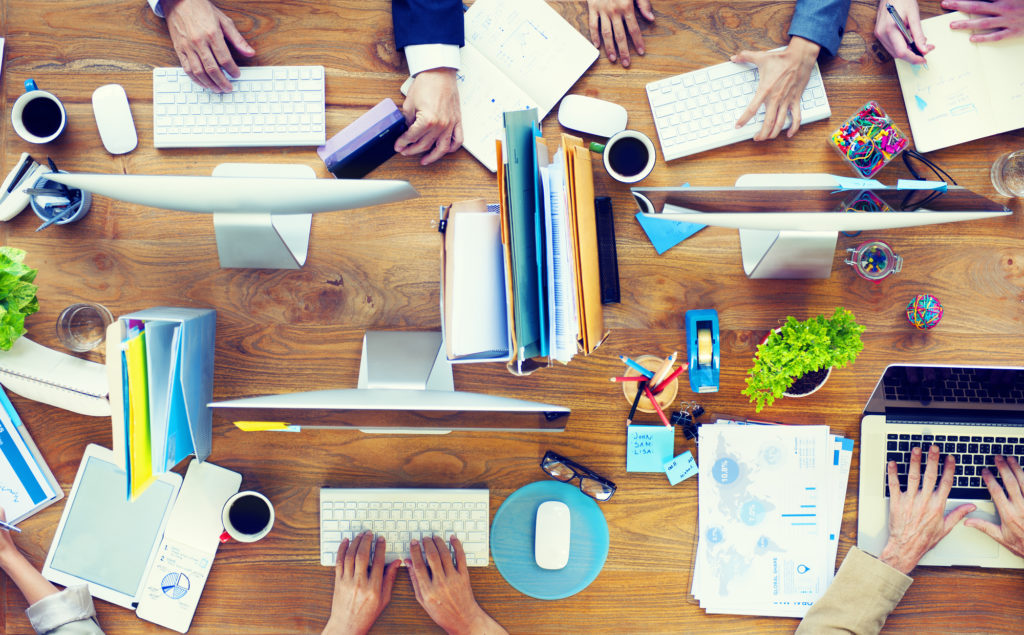 The Twitter Media Studio allows you to schedule tweets with media content, meaning you can skip your regular scheduling tools. And you just might want to do that, considering using this scheduling feature gives you the opportunity to modify metadata for your media, upload captions, add a call to action, and more. You can even invite other contributors to collaborate with you, which is perfect if you have other team members.

Now, I know you’re excited to get started with this awesome tool. So, let’s dive into how to use it, step-by-step, so it’s easy to follow along.

1. Film or Upload Your Video for Sharing

There’s no denying that video content is pretty powerful on social media. In fact, people are 2x more likely to respond to a video versus a tweet that’s just plain text or a photo. Not only that, but video tweets also get retweeted 6x more than a photo tweet. And when uploaded natively (in Twitter and not from a third-party tool), you can see 2x more replies and 2.8x more retweets.

Considering we all want to drive more engagement on Twitter, doesn’t it make sense that we should be sharing more original video content? Of course! But the key to doing that successfully is by using a tool many Twitter users aren’t familiar with, despite it having been around for years now. That tool is the Twitter Media Studio.

To get started, you’ll need to create a Twitter Ads account at https://ads.twitter.com. Twitter requires you put a credit card on file when you first sign up for advertising. The good news is you don’t have to spend a dime in the Ads area to access some of the features in there like Media Studio. Once you’re logged into Ads.Twitter.com you’ll see Media Studio in the navigation under “Creatives” then “Media.” (Shown above.) 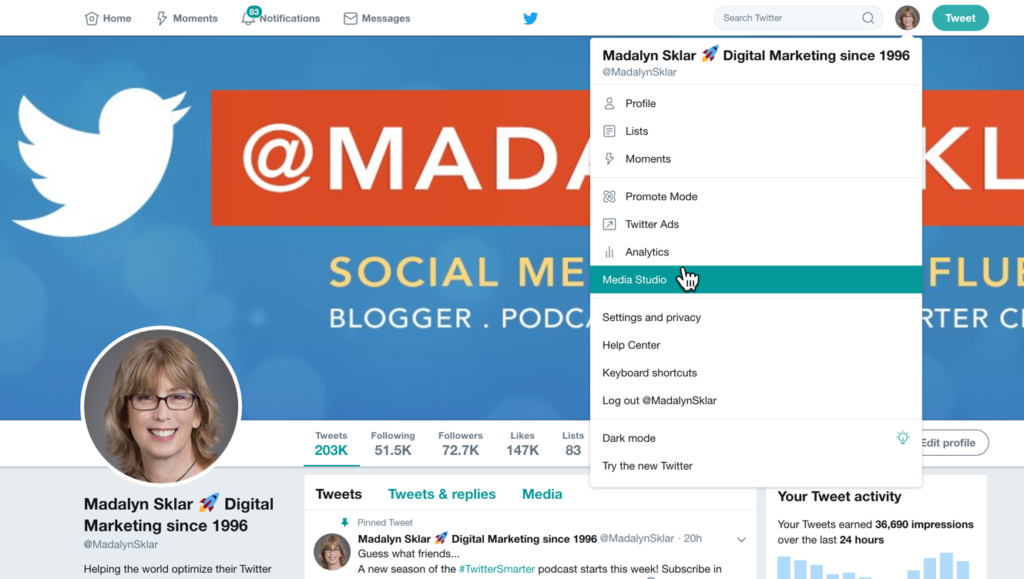 For some users, it will also show up in your regular navigation at Twitter.com (as you’ll see in the picture above). This feature is available on desktop only.

Twitter is more than just 280 characters of text. It’s also the perfect place to share incredible visual content, such as images, GIFs, and even videos. Done right, video content can perform really well on Twitter. I’ve previously shared why video is beneficial and even offered up eight ideas you can start filming today.

But if you’re sharing video content and not taking advantage of the Twitter Media Studio, you’re missing out! With this lesser-known tool, you can really amplify your posts thanks to the features it offers. The Studio essentially acts as a host for all of your visual content. Because it automatically pulls visuals from your tweets, you can manage old content, while also uploading new images and videos. That’s not all though!

To get started, you’ll obviously need to have a video that’s ready to upload. And luckily, using the Twitter app has made this incredibly easy. All you need to do is tap the button to compose a tweet, select the camera, and you’ll have the ability to capture video. Simply hold down the record button and start filming. Your video can either be filmed in portrait mode (with your phone upright) or in landscape mode to give a wider view. Consider what will work best based on the subject you’re filming. Once you’re done, you can save it to upload through Twitter Media Studio on desktop.

You can also upload video that you’ve already filmed with a traditional camera if you’d like. There are certain specifications you’ll want to keep in mind for any video though. You can upload a MOV or MP4 file that’s up to 1GB in size. For resolution, landscape videos are recommended to be 1280 x 720 and it’s 720 x 720 for square videos. And video length is typically two minutes and 20 seconds, so make sure you don’t go too long!

2. Add All of Your Metadata 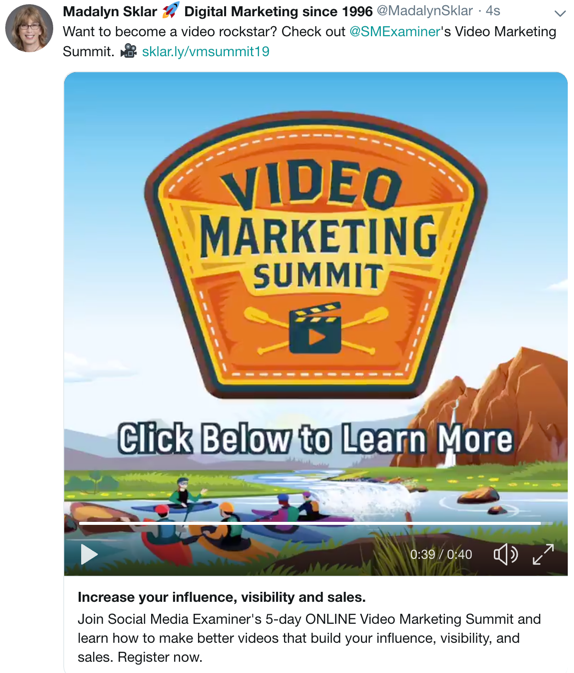 Above, you’ll notice this video tweet has added metadata, which can only be done in the Studio. It shows a title and a short blurb right below post. Looks so much better, right?

Once you’ve uploaded your video into the Media Studio, you’ll see the customization options that will really help you take things to the next level. Your tweets are going to stand out this way and help increase engagement. 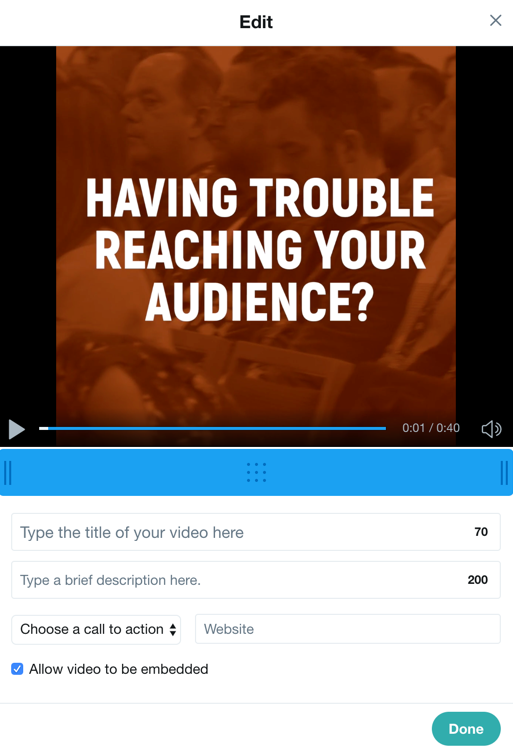 Here, you’ll have the ability to write a tweet for your post, add a title for your video, write a meta description to state what the video is about, and add a call to action. Having that CTA is pretty powerful because you can prompt people to take an action like visiting your website or watching the full video outside of Twitter.

Another handy feature of the Twitter Media Studio is the ability to caption your videos. This is something that many creators still aren’t taking the next step to do, but you’re actually excluding your audience when you don’t add captions. While it certainly requires a little extra effort on your part, they’re great to have because you want to be able to reach anyone in your audience who is hearing-impaired.

Plus, you have to consider that many people watch video with the sound off. Just think about how many people are secretly watching videos at work with no sound so their boss doesn’t find out! Take the extra time to add captions for every video you share online. All you need to do on Twitter is have an SRT file with the captions and upload it. Simple as that and your audience will truly appreciate you for it.

Your video is uploaded, you have added all of the pertinent metadata, and you’ve got your captions… Now it’s time to hit publish or schedule it for later. That’s what’s so great about Twitter Media Studio. You can publish your brand new tweet right then and there or schedule it to be posted at an optimal time. With this feature, you might find you’re using third-party scheduling tools less and less!

The Only Disadvantage I’ve Found

We’re human! Sometimes, we make mistakes in the forms of typos and other errors. And unfortunately, there’s no way to edit the tweets you’ve scheduled in the Twitter Media Studio. If you notice that you’ve made a mistake, you’ll have to delete the post and start over. It’s not exactly user-friendly, but that’s the way it is. So, make sure you double-check (or triple-check) your tweet before scheduling it out.