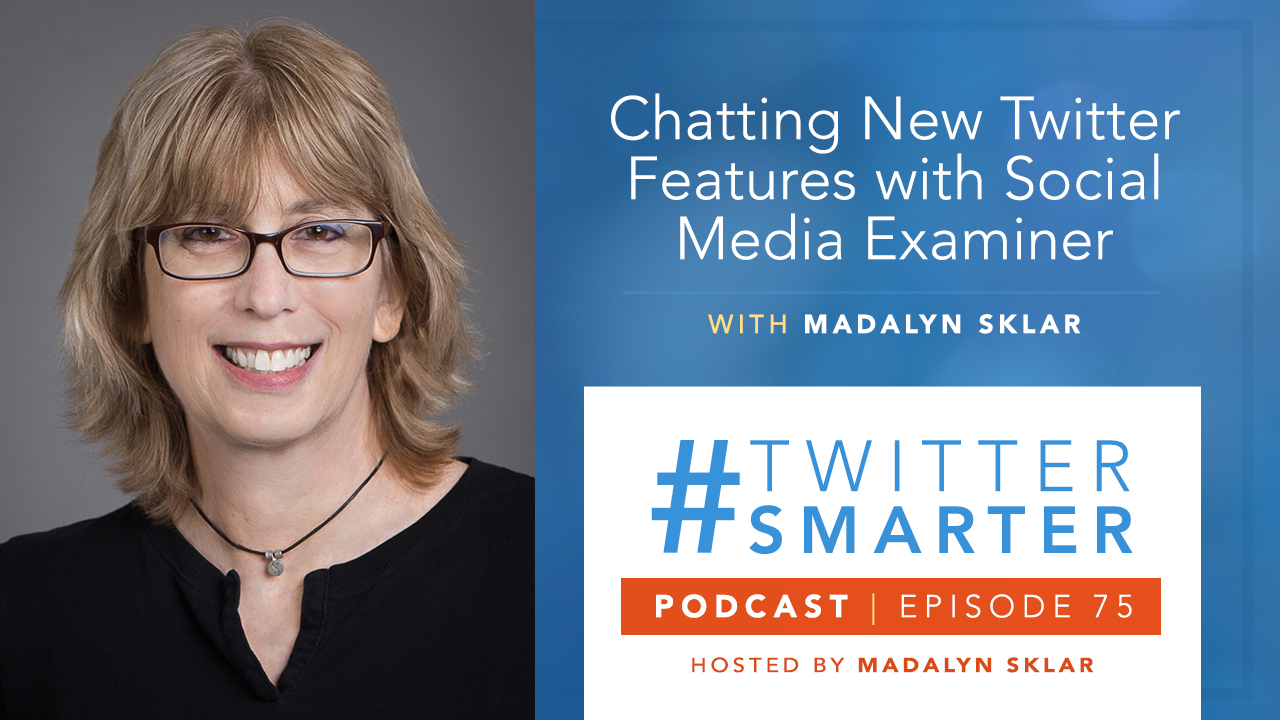 In this bonus episode, you’ll hear me talk about new Twitter features. Some are available now, others are coming in 2020 and a few are being tested for possible use in the future.

This podcast episode is brought to you by the #TwitterSmarter Twitter chat. Each week, I host this chat and bring together hundreds of people in an active one-hour discussion revolving around Twitter marketing. It’s every Thursday at 1pm ET. Hope to see you there!

In this episode, I talk about some exciting new Twitter features. Here’s what you need to know:

First off, if you aren’t familiar with Twitter’s Media Studio, take a moment and read my blog post about it. This is a very handy tool that many people don’t know about or just don’t take full advantage of. And it’s time to change that!

But what’s really cool is that they’ve added a tool to the Publisher Insight section of the Media Studio, which is Conversation Insights. This will be really beneficial for creators because it’ll allow you to see tweets you might have missed, going beyond just mentions and hashtags. This will ensure you’re seeing any mentions of your brand. Plus, it will help you go above and beyond when it comes to customer service.

The real advantage here is that it’s going to be built right into your Twitter account. This means you could potentially do away with any third-party social listening tools that you’re currently using if you find Conversation Insights gets the job done. Plus, having everything in one place is definitely convenient so you never have to navigate away from Twitter itself.

Note: You will need a Publisher account on Twitter to gain access to Twitter’s Media Studio. That doesn’t mean you need to run ads, but you need to set up the ad account and put a credit card on file. (You won’t be charged unless you publish an ad.)

#TwitterTopics are super cool. Twitter has over 300 subjects available across sports, gaming, and entertainment. In my testing, I was able to easily add two of my fave local sports teams. Have you tried this new feature yet? #TwitterSmarter pic.twitter.com/GYiSeJmbES

I talked about this new feature the last time I was on Social Media Examiner’s show… But guess what? It has finally rolled out to users! This will allow you to follow various topics that you might be interested in. At this time, there are over 300 topics across sports, gaming, and entertainment.

In the tweet above, you can see how to access it right from the Twitter desktop. You simple need to click “More” and you’ll see “Topics” pop up. Check it out and try to add some of your interests. Then, you can start seeing a stream of tweets all about your favorite things in your home timeline, allowing you to stay updated with ease!

3. The Ability to Remove Yourself From a Conversation (Coming in 2020)

If you’ve ever been tagged in a Twitter conversation that you don’t want to be part of, you know how frustrating that can be (especially if it’s blowing up your notifications). While you do have the ability to mute a conversation, sometimes that’s not enough.

And this feature would allow you detach yourself from a conversation or a tweet where you’ve been tagged in the image. So, if you’re ever tagged in a spammy tweet, you’ll be able to remove yourself with a few simple clicks!

4. Block Certain Tweets From Being Retweeted (Coming in 2020)

In most cases, retweeting is great. It’s the perfect way to gain more exposure for your tweets and who doesn’t want that? But there are some instances where you might not want a tweet to be retweeted.

For example, if you have a tweet that has been taken out of context, you could block people from retweeting it. And it could also be helpful if your tweet goes viral, but not exactly in the way you hoped. It’s not a feature that I anticipate will be used very often by most of us, but it’ll be nice to have if the need arises.

5. Stop People From Mentioning You Without Permission (Coming in 2020)

This is one of the new Twitter features that will be really helpful when it comes to safety. By not allowing people to @mention you, you’ll be able to shut down troubling internet issues like bullying or abuse. That means if a troll pops up and starts sending negative mentions, you can quickly shut it down.

6. Remove a Specific Mention From a Conversation (Coming in 2020)

You may soon also have the ability to remove another Twitter user from a discussion you’ve started. If you’ve tagged someone in a conversation and that person no longer wants to be included, or if you incorrectly tagged someone initially, they can be removed easily while still keeping the tweet thread intact.

You know how Facebook allows you to change the privacy settings on a post so that it’s shared publicly, with friends, or with a certain group (like close friends)? Well, Twitter has never allowed that before. Your tweets were either public or private. There’s never been an in between. But one of the new Twitter features will change all of that.

It would allow you to share a tweet for a specific audience, basing it off of a certain hashtag, interest, or friend group. It’ll allow you to have more targeted conversations and could also provide a level of privacy that you wouldn’t have otherwise.

There are definitely a lot of bots on Twitter. While some of them are useful and tweet out valuable information, the same can’t be said for all of them. And one of the new Twitter features just might make it easier for you to distinguish between a bot account and an account that’s run by an actual human being.

Considering Twitter already uses a checkmark to label verified accounts, using another checkmark to label bots could create a bit of confusion. If this feature were to go live, we’d want to see a clear difference between these two types of checkmarks.

On the one hand, I feel this could also be beneficial to the Twitter platform overall because it promotes transparency. While some bot accounts actually use the word “Bot” in their usernames, having the checkmark would confirm once and for all which accounts are bots.

9. Emoji Reactions in Your Direct Messages (in Testing)

Could Twitter be taking a cue from Facebook? They’re currently testing the ability to use emoji reactions in your direct messages. It may seem like a simple addition, but I think it’s a great way to acknowledge DMs without the need for a written response, ultimately saving you time. This will really come in handy, especially for those who receive a lot of DMs.

Social media managers will rejoice with this news! Another of the new Twitter features that’s currently in testing is the ability to switch between Twitter accounts while in replies. So, if you’ve ever been typing a reply and realized you’re writing from the wrong account, you can easily make the switch. Of course, this is something TweetDeck already allows you to do. It seems Twitter is grabbing some inspiration from there.

Overall, this feature will be most beneficial for social media managers, brands, etc. It’s not necessarily directed at the average Twitter user. It’s just important to be extra careful not to choose the wrong account when typing your reply!

You can watch my full interview on Crowdcast here:

How to Reach Me

And please check out my website, madalynsklar.com, and subscribe to my weekly newsletter. That way, I can send all of my latest Twitter tips (from my podcast, Twitter chat and blog) directly to your inbox.

Your call to action for this episode is to tweet me @MadalynSklar and tell me what new features you’re most excited about. And do you have the new Twitter Topics yet? I’d love to hear what you think. You can learn more about Twitter topics at MadalynSklar.com/TwitterTopics.

Need some simple Twitter marketing guidance? Check out my FREE #TwitterSmarter Secret Sauce course. It’s a mini-class I put together at madalynsklar.com/secretsauce. It includes articles and videos that share my strategies on how to boost your presence on Twitter so you get better results.

Ready to go all-in for Twitter marketing training? Then you’re ready for my #TwitterSmarter Master Class. This online course is ideal for beginners and intermediate Twitter users. You’ll get step-by-step instructions that will help you enhance your profile and learn strategies that work! You’ll learn how to maximize your presence and monetize your efforts.

Contact me to learn how YOU can become a #TwitterSmarter podcast sponsor.

Most Recent Reviews on iTunes 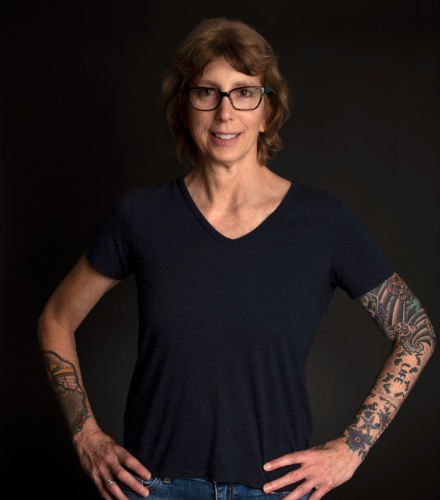