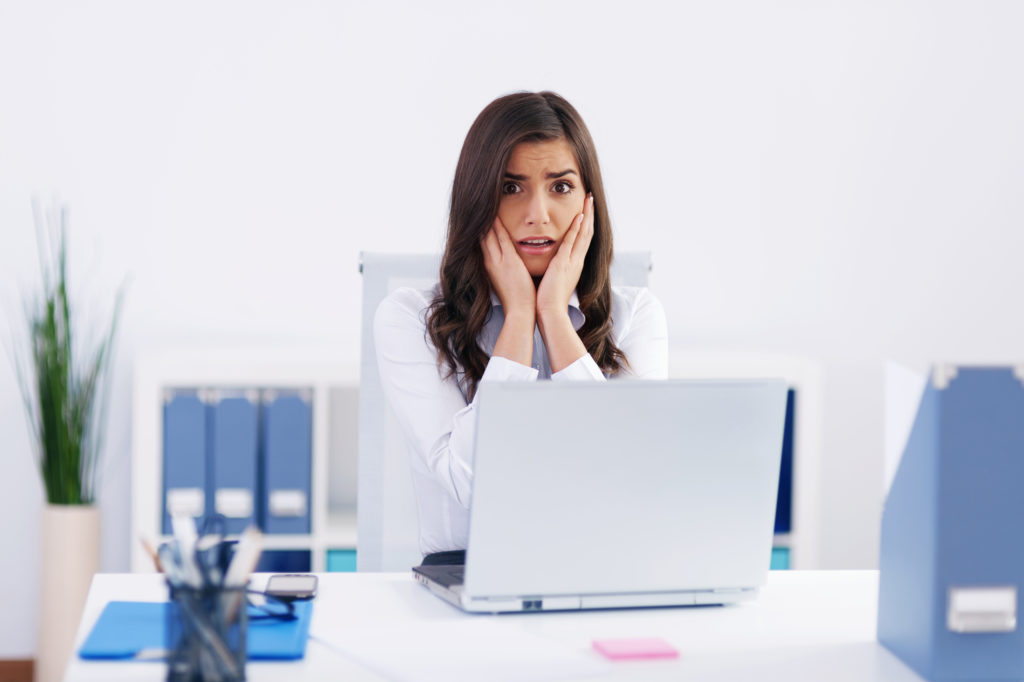 When it comes to social media, we all want to see our accounts grow and we want to see engagement in terms of comments and click-throughs. But it’s going to be hard to see the results you desire if you’re constantly making mistakes that push people away.

And there are specifically 10 common Twitter mistakes that many people are still making. These mistakes impact the tweets they’re publishing, how they’re engaging with others, and even how they’re managing their platform overall.

So, what exactly are these Twitter mistakes? And are you guilty of making any of them? Well, the good news is that they’re pretty easy to fix. Here are 10 things to avoid on the platform:

Don’t be egg, my friend! Make sure you take the time to fill out your Twitter profile with a profile picture, a bio that communicates what you’re all about, and a header image. Don’t forget to add a pinned tweet to because it can really help showcase an email opt-in, your best content, or an offering you’re promoting.

I have a blog post with 11 tips to make your Twitter profile stand out, so make sure you’ve done those things. It’ll help with getting your profile set up and sharing content.

2. Being Inconsistent With Posting

You want to stand out on Twitter, right? Well, the best way to do that is to actually be present on the platform. And you do that by consistently sharing new content and engaging with your audience. Otherwise, people just might forget all about you! Letting your account go silent is one of the biggest Twitter mistakes you can make if you want to see growth. 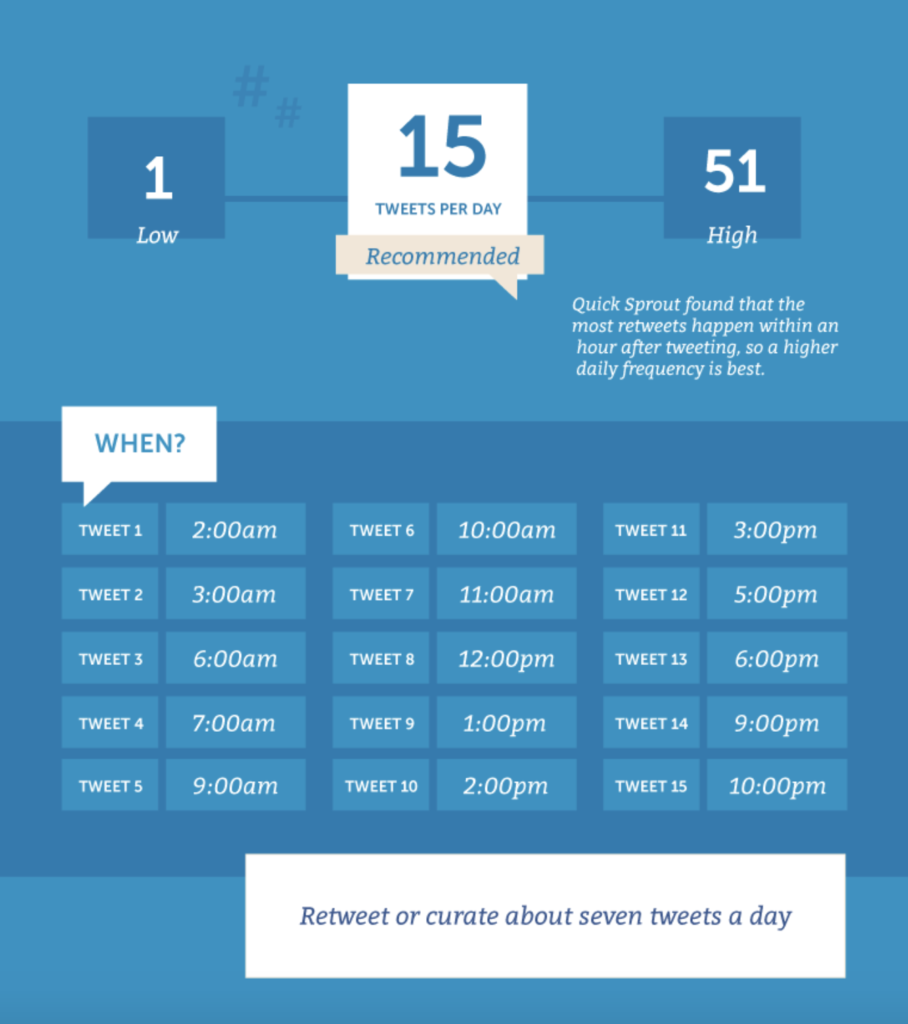 To ensure you’re staying top-of-mind for your community on Twitter, create a posting schedule that works for you. As shown above, CoSchedule recommends tweeting 15 times per day. If that feels like too much for you, then scale it back a bit. And while you’re at it, get smart about when you’re posting. Sprout Social has shared some of the best times to tweet based on your business.

Don’t get caught up in thinking that every tweet needs to link back to your website or some other offering. Valuable tweets come in a variety of styles. You can share text-only posts, photos or videos, or even add polls to encourage engagement. Try switching things up and don’t be afraid to experiment with different kinds of tweets to see what resonates with your audience. It’ll prevent your content from getting stale and predictable.

It’s always more important to be kind than to be right. – Rich Simmonds #quote

I love to share a motivational quote from time to time because it’s a great pick-me-up for my audience (and me too). It’s simple, but it’s a great way to encourage replies, likes, and shares.

Listen, social media is a great place to share your offerings with the world. And you should be proud enough of what you’ve created to shout it from the rooftops! However, you want to make sure you aren’t going overboard when it comes to self-promotion. After all, talking about yourself all the time is going to turn your audience off real quick.

Instead, you should balance promotional tweets with other content. Share posts from other sources that you know your audience would find valuable. Tweet out helpful tips. Or even snap a photo of your day to show what you’re up to. I have a blog post all about behind-the-scenes content ideas you can share on Twitter. Definitely try those out!

And always remember what Gary Vaynerchuk says about posting on social media. In his book, Jab, Jab, Jab, Right Hook, he mentions you need to throw a few jabs before you go in with the right hook. That means you want to share high-quality, valuable content and focus on building a relationship with your community before asking for the sale.

5. Using Too Many Hashtags

Hashtags are essential when it comes to sharing posts on social media. They help your content get discovered, after all! But one of the most common Twitter mistakes that people make is going overboard with their hashtags. Even though you can technically use as many as you want, that’s not exactly the best practice on the platform. 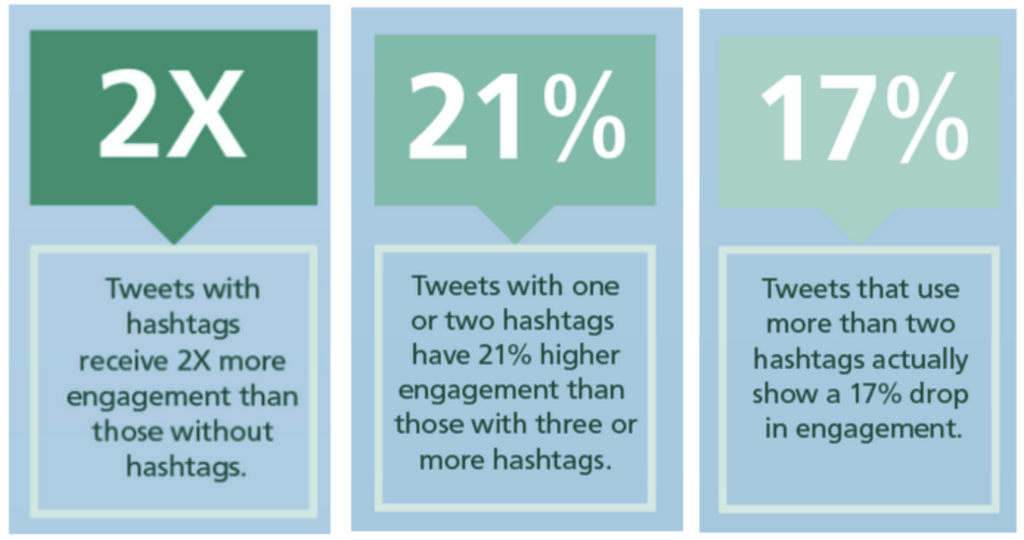 In fact, Twitter recommends using no more than two hashtags per tweet. And tweets with just one or two hashtags have 21% higher engagement than those with three or more (as shown above in this graphic via Buffer). So, you’ll want to take full advantage of the ones you do use by making sure they’re relevant to your content and active enough that it’ll help your tweet be seen.

We all make mistakes from time to time, whether it’s a typo or a simple misspelling. And it doesn’t help that Twitter lacks an edit button to allow us to fix those mistakes after our tweet has been published. But if you’re always making spelling or grammar errors, it’s not a good look. It can come off as sloppy and unprofessional.

Before you hit send, take a moment and read through your tweet to check for any mistakes. This way, you can catch them and correct them beforehand.

7. Ignoring Replies From Your Community

The great thing about social media is the connections you make with new people from all around the world. And you simply cannot foster those relationships if you’re not actively engaging with people. If you see replies coming in from other people, take the time to read them and respond to them.

8. Failing to Get the Conversation Started

While we’re on the topic of engaging with others, one of the most common Twitter mistakes people make is not putting themselves out there. Maybe it’s that you’re a little shy or you don’t know what to say. However, you can really stand out from the crowd if you begin making an effort to start conversations.

Ask questions and encourage people to reply. Share polls to get feedback and thoughts from your audience. The ideas are endless! And I have six hacks for generating conversations in this blog post. Just don’t wait for people to come to you.

9. Complaining About Your Job or the Company You Work For

This one should be a given, but the reality is we often get caught up in the moment and post on social media without thinking first. And sometimes we just assume no one will ever see it. However, that’s just too risky a game to play. You should never take to Twitter or any other platform to complain about your job. Otherwise, it could spell disaster if your boss ever sees it.

Yes, you’re using these platforms as a way to build your brand and connect with your audience… But that doesn’t mean they’re all the same! How you treat Twitter should be different from how you’re using Facebook, Instagram, or LinkedIn. And unfortunately, one of the Twitter mistakes so many people make is simply cross-posting the same message on every platform.

Instead of taking the easy way out, take the time to customize your message for each platform. Consider your audience that’s there and what they’re interested in seeing, then you can tweak your message accordingly. You also want to be smart about when you’re posting, hashtag usage, and even image sizing. It all makes a difference!