About Twitter Bookmarks: How to Save Tweets for Later 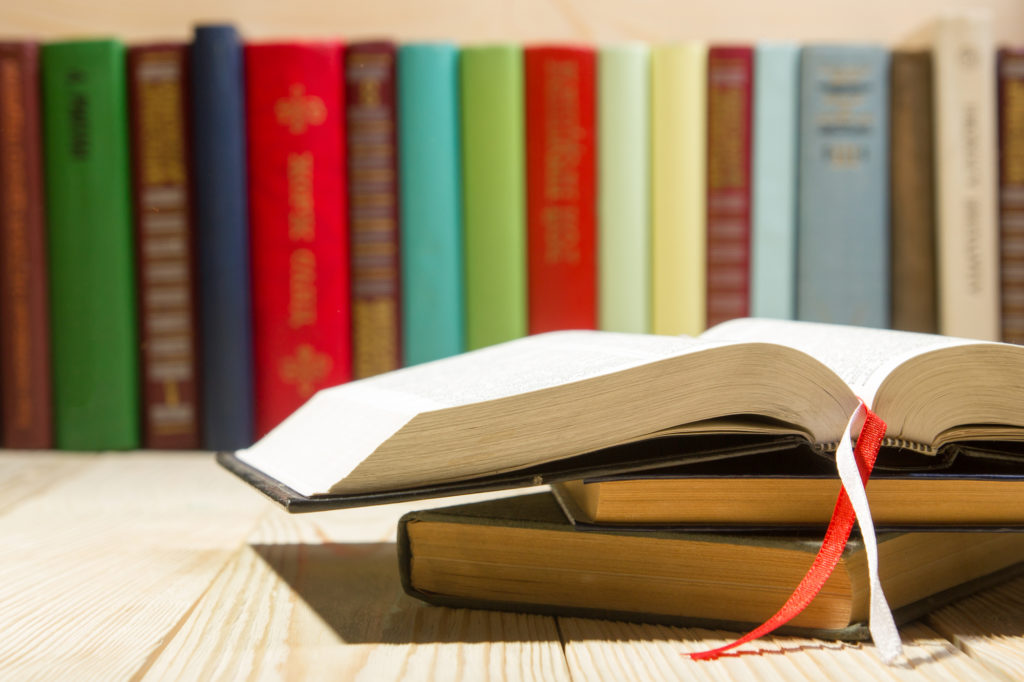 This particular feature allows you to save tweets to refer to at a later date. As you add tweets to your Twitter bookmarks, it’ll create a running list that you can access and scroll through whenever you want.

The best part? Your Twitter bookmarks are for your eyes only. Now, let’s talk about how you can begin saving the tweets that catch your eye.

Bookmarking a tweet can be done on both mobile and desktop with just a few simple clicks. To save a tweet that catches your eye, just follow these steps:

Once you’ve found a tweet that you’d like to save, you’ll notice a row of icons below the tweet itself. There’s the bubble for replying, the arrow icon for retweeting, the heart for liking, and the final icon allows you to share a tweet. This is the one you’ll want to click on. See the example below. 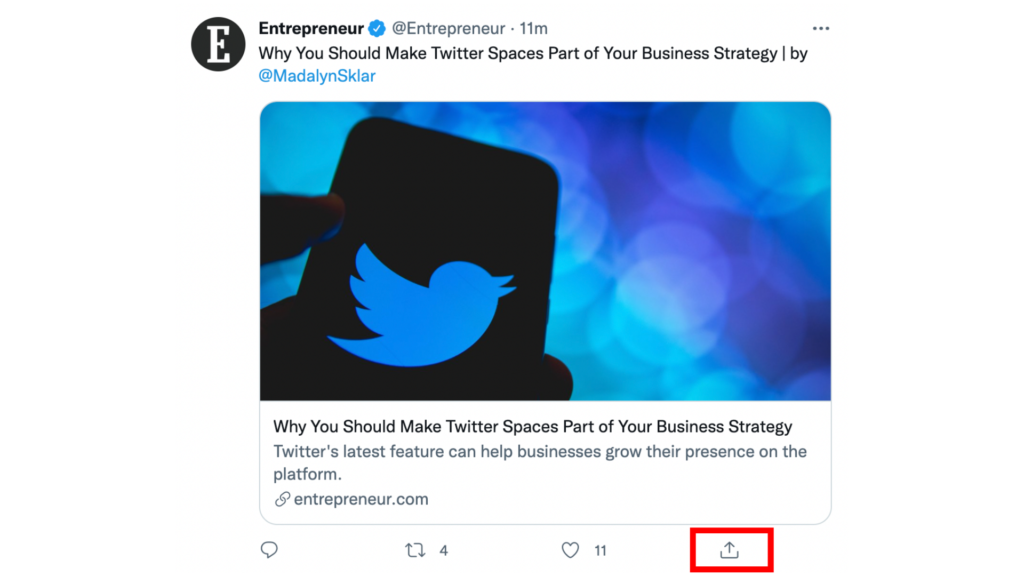 When you click on the share icon, a menu will pop up that presents three different options. Click on the one that says, “Add Tweet to Bookmarks.” You can see this in the screenshot below. 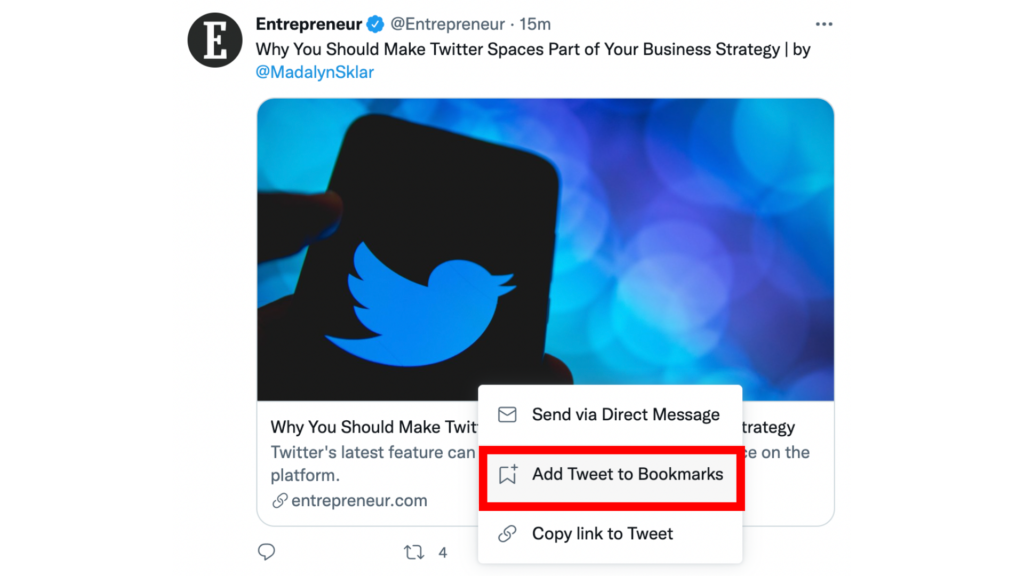 The process is the same on mobile. The only difference is that you’ll see more menu options when you click on the share icon. In this case, you’ll want to click on “Bookmark.” It’s highlighted in the screenshot below for easy saving. 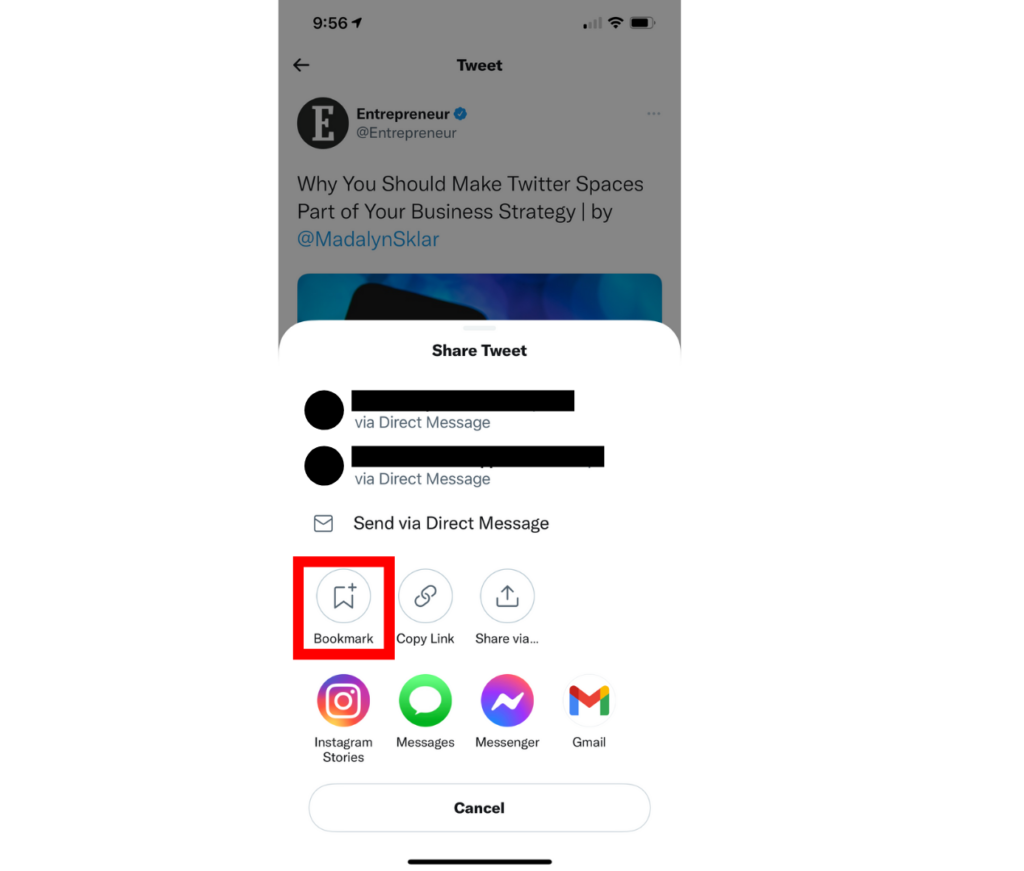 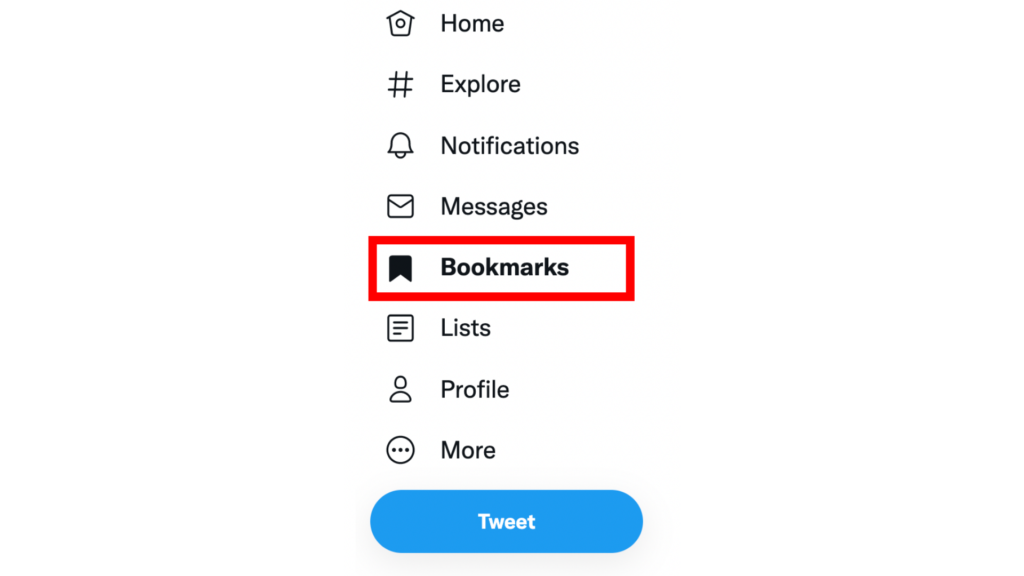 Now, you may be wondering how someone might incorporate bookmarks into their overall Twitter strategy. Well, there are a few ways that I personally like to use the bookmarks feature, as well as some other fun ideas you might find useful. These should get you started:

1. Keep Track of Things to Read or Watch Later

We’ve all been there before… Scrolling through Twitter, only to come across an article or video that piques our interest, but we simply don’t have time to read or watch at the moment. Instead of hoping your memory serves you well and you remember to look for it later, you can just bookmark it. This way, you’ll have a running list of awesome content to check out whenever you have some free time (like when you’re waiting for an appointment, for instance).

A compilation of hysterical tweets is the perfect remedy for a bad day. The next time you spot a tweet that makes you laugh, save it to your Twitter bookmarks. This way, you’ll have a nice selection of amusing content to refer back to later when you need it the most.

3. Save Tweets Where People Compliment You

It’s always a good feeling when someone has something nice to say about you, right? Well, you may want to consider bookmarking those tweets for later. These tweets are helpful because you can refer to them when you’re looking for social proof or testimonials to add to your website. Showcasing that people love your work will go a long way in building trust and authority.

Because I host Twitter Spaces three times per week, this is one of the top ways I use the Twitter bookmarks feature. You see, you can share tweets within the Spaces you host. So, if I come across something interesting that I’d like to reference while I’m hosting a room, I’ll save it in my bookmarks so I can easily find it and share it in real-time. By doing this, it helps to guide the conversation and provides context to those who are tuning in.

5. Bookmark Things That Inspire You

I also love to use Twitter bookmarks to save well-done tweets. For instance, if I see someone using Twitter threads in an impressive way, I’ll save it to refer to later on. Whenever another person has used Twitter in a way that inspires you, save it. If you come across a quote that speaks to you, save that too. You may even want to keep track of tweets that have given you ideas for future content. Bookmarks are your place to save whatever you want!

Another Feature to Watch For

Once the paid subscription service, Twitter Blue, launches worldwide, users will have the ability to create bookmark folders. This will provide the ability to organize saved tweets by category so you can easily locate them later. Currently, Twitter Blue is only available in Canada and Australia. Stay tuned for that! It’ll make Twitter bookmarks even more beneficial.