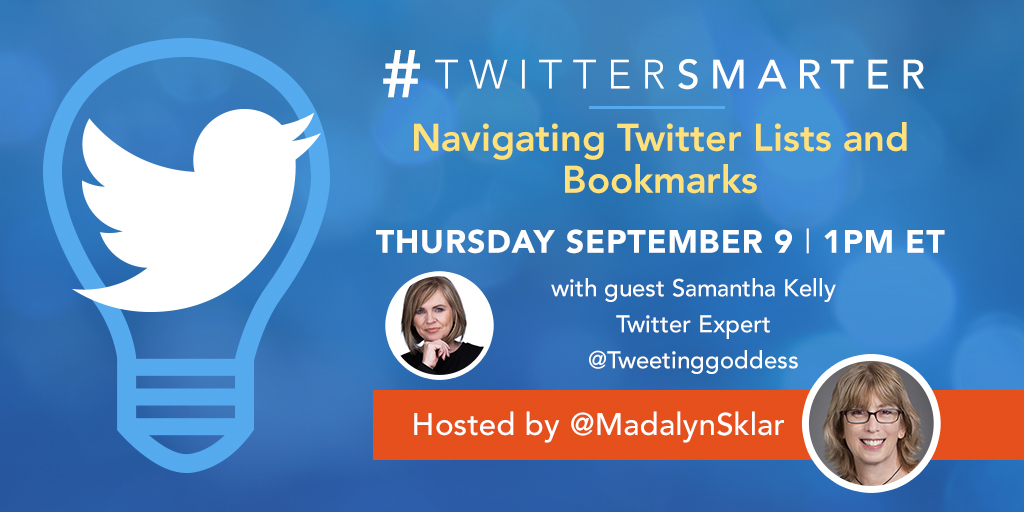 You’ve heard of them, you’ve seen them, you’ve even used them. Still, some Twitter features can be surprising, confusing, and immensely rewarding at the same time. Lists and Bookmarks are two such features. This week on our #TwitterSmarter chat, we invited Twitter expert, Samantha Kelly, to join our other Twitter expert, Madalyn, to discuss how brands can get the most out of these two features. Here’s a summary of our chat.

Twitter Lists are a great way to categorize your audience. You can add people to a list, whether you follow them or not, and have a custom feed of tweets from people on your lists. Lists can be private or public, so you can create a public list of handles that share helpful resources and private lists of people you competitors, leads and people you want to keep up with.

A.1 Twitter lists are a fab way to segment your audience & fine tune your Twitter experience. There are private & public lists. E.g. Inspiring folk & services you might need in future! Create lists of leads but keep these private! No one wants to go on THAT list #Twittersmarter

As Jim added, Twitter Lists are a comprehensive organizational feature. By letting you create your own feeds where you can see only the tweets from people you want to see (as opposed to related tweets and topics), lists make it easier to manage the barrage of information you get on Twitter.

A1. Twitter lists keep you organized and let you curate your feed to focus on what is important to you and reduces the noise that gives Twitter a bad name.#TwitterSmarter https://t.co/9ePkHORLXD

Q2: What are best practices for using Twitter lists?

Samantha told us she creates lists of experts in various fields because journalists or event organizers often ask her for these references. It’s an effective way to expand your network.

A.2 (b) I also create Twitter lists of certain experts as I am often asked by journalists or event organizers if I know a particular expert in a certain niche.
#TwitterSmarter

Another good way to do this is to create public lists. When you add someone to a public list, they get a notification. That becomes a good conversation starter.

A.2. (c) I have a few private lists mostly of media or leads but most of my lists are public. When you add someone to a public list they get notified. It gets you on their radar & when you engage & nurture your lists you stay top of mind to that person. #TwitterSmarter

That said, though, be mindful of which lists you make public. As Madalyn said, if you’re creating a list of highly influential people in your industry you want to partner with or business leads you need to follow up on, perhaps you should keep those private. People won’t get a notification when you add them to your private lists.

A2b: For more tips on how to create Twitter lists and ways to use them, check out this post from my blog: https://t.co/bf0HYL3hWw #TwitterSmarter

Madalyn also has a comprehensive guide on Twitter Lists and how to get the most out of them. Have a look.

It’s exactly as it sounds. When you come across a tweet with a link to a research paper or an interesting article you want to read but can’t do right away, you can bookmark it and refer to it afterward.

But it doesn’t necessarily have to be a tweet with a link. If you run into an insightful thread, a single tweet, or even a retweet, you can bookmark them too. Our guest explained that she collects such tweets to use as examples in her workshops or webinars.

A3: I use Twitter bookmarks to save a tweet that I might not have time to read at that moment but I can read back on later.
I also use bookmarks to highlight really great tweets to use as examples in workshops or webinars. #TwitterSmarter

Because it’s so easy to bookmark a tweet, it’s also so easy to save hundreds of tweets and forget about them altogether. As Theodora pointed out, it could get a bit awkward when you eventually do get back to it. To avoid this tricky situation, browse through your bookmarks occasionally.

Bookmark tweets that genuinely add value to you and help you. You can then reshare these tweets in your newsletters or social media, giving both yourself and the original creator a boost. As always, remember to credit the source.

A4: Bookmark the tweets that you feel add value or are interesting to you.
You can repurpose these by putting them in your Twitter newsletter and tag the creator to let them know. This makes the creator happy too! #TwitterSmarter

Another good way to use bookmarks is to save positive tweets, testimonials, and reviews. You can use them as references for future endeavors.

A4(c) I bookmark positive tweets from events I have run to use as data when looking for a sponsor for the next event. The positive tweets show how great the event is #Twittersmarter

Q5: Which do you use most, Twitter lists or bookmarks?

Our guest voted for lists, noting that it saves her time and prevents her from getting lost in the feed.

A.5 I mostly use Twitter lists! #Twittersmarter They are an essential part of my experience on Twitter. Stops me going down a rabbit hole and saves me time too

Alberto also mentioned he uses lists more than bookmarks. He even hinted that with many of us using lists extensively, the actual Twitter feed isn’t as important as it once was.

In my case, Twitter Lists. Even more than the main feed. That makes me think… Is there still a main feed?

Every day I look my lists a couple of times… you know, looking what's happening 🙂#TwitterSmarter https://t.co/6u4HZlaVVY

Q6: Can you categorize your lists and bookmarks?

You can categorize people you want to hear from into separate lists. You can also add one person to multiple lists. However, you can’t create a category within a list, like a folder. You also can’t categorize your bookmarks unless you’re using a paid version of Twitter. That said, though, if you’ve bookmarked a specific tweet, you can add the author of that tweet to a list.

A6:Bookmark categories are not available yet. You can add the bookmark creator to a twitter list. And yes you can give Twitter lists a special title and description. #Twittersmarter I use fun things like ‘Awesome people’ or ‘very interesting people’ (usually makes someone’s day)

Madalyn told us about the paid version of Twitter. Dubbed Twitter Blue, the subscription service includes a few elite features including an option to categorize your bookmarks. Currently, Twitter Blue is only available in Canada and Australia. More on that here: https://help.twitter.com/en/using-twitter/twitter-blue

A6: You can make as many lists as you like, making it easy to categorize them however you want. At this time, categorizing bookmarks is only accessible on the paid subscription, Twitter Blue, which is available in Canada and Australia. #TwitterSmarter
https://t.co/YslmDJkDF0 https://t.co/miP7t4TAYe

Q7: Can you share your lists and bookmarks with other people?

If you create public lists, you can share a link to it and people can subscribe to your lists. Our guest shared a list that she’s put together called Irish gift ideas.

Q8: Are there tools that can help you better manage your Twitter lists and bookmarks?

As our friends from GiveWP noted, Tweet Deck is a great tool to manage lists. You can add a separate column for each list and monitor all of them simultaneously.

A8: There are a ton of well-known tools. We've shared this throughout today's chat but we use TweetDeck (with the Better TweetDeck extension) to manage our Twitter efficiently! #TwitterSmarter pic.twitter.com/KBqe7KTMhI

Vivian also told us about a feature in Nimble that lets you import your contacts from Twitter lists. This is particularly helpful for salespeople and anyone else who’s looking to build strong relationships with their customers. Nimble is a CRM tool, and you can learn more about the feature here.

Well, folks, that’s all from me this week. Thanks so much for reading through, and for more great insights from our chat with Samantha, have a look at this Twitter Moment that Joana put together. And if you have some spare time next Thursday, join us live for our next #TwitterSmarter chat. We’ll be on from 1pm ET. Catch you then!

I write all the things—technical and marketing copy to fill the pocket; haiku and short stories to fill the soul. A social media enthusiast, I’m a member of the #TwitterSmarter chat crew, and always happy to take on writing gigs.