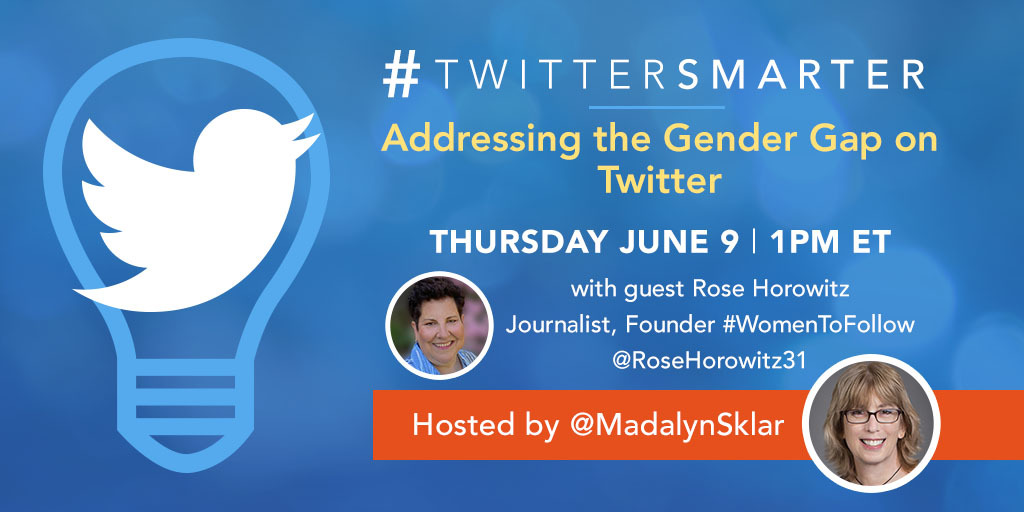 How often do you notice who you’re replying to on Twitter? I mean, really noticed? Though we know the names and profile pictures of our Twitter connections, most of us don’t stop to ponder the diversity—or the lack thereof—of our communities on social media. That’s what we wanted to explore in this week’s chat. So we invited journalist and the founder of the #WomenToFollow movement, Rose Horowitz to talk about the elephant in most rooms. Here’s a summary of our chat.

Q1: Do you find a gender gap on Twitter?

The answer to this question depends on your audience and your community. Our friends from VirtuDesk said that they don’t see a gap on Twitter because they work with people of all genders.

A1: For us, we don't. This is because the people we are interacting with on Twitter, help and support each other regardless of gender. #TwitterSmarter

However, if you pull the numbers, as our guest did, you’ll realize that there’s quite a gender gap on Twitter. Users who identify as men have statistically more influence (followers and engagement) than their counterparts.

Q1a. Yes, absolutely. Big picture: women have less influence than men on Twitter.
Numerous studies of Twitter use in different fields – from journalism to medicine – show that men are followed and retweeted by both men and women in greater numbers.#TwitterSmarter https://t.co/DDUBvaRgaT

For instance, Rose quoted a Vox article that revealed that 82% of journalists in the Washington, D.C. area are more likely to follow and engage with men.

Q1c: Women also have less influence on Twitter than men in medicine, according to Journal of the American Medical Assoc.

Women had half the mean number of followers as men and were more likely to be followed by women compared with men. https://t.co/RlN6JO3QfB#TwitterSmarter

This is true in medicine as well—another industry that has highly-skilled professionals. Women had half as many followers as men and they also had a greater number of female followers.

From a pure statistics point of view, in the US and Canada, men are far more active on Twitter than women. While 61% of Twitter’s audience in the US is men only 38% are women. This gap is even higher in many other parts of the world.

A2: Men are more actively engaged than women on Twitter in the U.S. & Canada.

In the U.S., men account for 61% of Twitter’s audience while women account for 38% of its audience, according to @StatistaCharts. The ratio of men is higher in other parts of the world.#TwitterSmarter https://t.co/JMs3pGCq8H

However, as with many things on Twitter, your experience depends largely on who you engage with. Andrea, for instance, said women are highly active in her Twitter circle. As a communications professional, she’s interacted with a lot of women tweeters, and she finds this behavior is true even among marketers.

A2: Very active in my circle. I have a career in communications, which tends to be heavy to women. But, expanding the circle to marketing and media, still fairly even. I keep connected with people who engage. Reciprocity is key. #TwitterSmarter

Q3: Why is it important to have women’s participation on Twitter?

It’s important to have women’s participation on Twitter because women make up half the world’s population. Having their involvement in society, economy, culture, and arts will only enrich all of our lives. That’s how we can truly achieve an equal and just society for us all.

A3a: Hello??? Women make up half the world’s population.

How can we meet #genderequity goals in pay, influence, & equality in the home & workplace if women do not have equal say on the world’s most influential platform?#TwitterSmarter https://t.co/BqlZeJZnLv

It’s also worth noting that women have a large purchasing power. Twitter users are educated, highly-paid individuals. This means that there’s a large portion of women users on Twitter—leveraging their reach and influence is crucial for any brand selling on the platform.

A3b: Companies & brands need to be on Twitter to reach huge buying power of women.

As AnuMeera so nicely put it, we need women to participate on Twitter so that we can balance social media narratives. The more women participation we have, the more diverse our perspectives will be.

#twittersmarter
A3
To balance the narratives that are built

Q4: How can we amplify women’s voices on Twitter?

*⃣Take pledge to never be a speaker at an all-male panel in person or online.

*⃣To me, that includes #TwitterSpaces.
How comfortable are women if maybe 80% of speakers are men?#TwitterSmarter https://t.co/UvXbP7fhvF

Also, be more aware of social situations that don’t include women—such as an all-male panel or Spaces conversation.

*⃣Take pledge to never be a speaker at an all-male panel in person or online.

*⃣To me, that includes #TwitterSpaces.
How comfortable are women if maybe 80% of speakers are men?#TwitterSmarter https://t.co/UvXbP7fhvF

Madalyn emphasized the need to share women’s content, but she also made another crucial point: be genuine in your conversations. Don’t reply to a tweet just for the sake of it. Initiate and engage in meaningful discussions.

A4a: If you want to amplify the voices of other women on Twitter, share their content! Promote the work women are doing. Retweet their posts when they’ve shared something valuable. And of course, go the extra mile and engage with them through genuine conversation. #TwitterSmarter https://t.co/OHWUvaN531

Q5: What are some ways to make Twitter more welcoming to women and gender-diverse populations?

One of the easiest and most straightforward ways to make Twitter more welcoming to a diverse audience is to for all of us to be decent human beings, as Nicky put it.

A5 I joined for a class & I stayed bc it felt like a really welcome community for areas I was interested in. I think the negativity comes from doom scrolling & divisive politics.

As Rose mentioned, we don’t have enough data and research into how gender-diverse people use Twitter and what they get out of the platform. What we do know, though, is that LGBTQI+ folk are misgendered more often than cis men.

Q6: How important is a mentor for women new to Twitter?

It’s crucial for women to have mentors on Twitter. Not only is Twitter a mega network of people, but it can also be challenging and intimidating at times. Having a mentor can help you navigate the platform. That said, though, it’s also important to find a mentor that resonates with you.

Matthew made a good point as well—he spoke about the value for men to have women mentors on Twitter. He also gave a shout-out to Madalyn and Wendy Sue Swanson for their mentorship over the years.

A6. I'll reverse the question a bit. I think it's crucial for men to have women mentors on Twitter. For example, I consider @MadalynSklar a social media mentor "mentor' @wendysueswanson ( a pediatrician) a soc med "mentor." #TwitterSmarter

Q7: Tell us about a time you saw men supporting women on Twitter.

Our guest mentioned some of the many men on Twitter who support and encourage their women counterparts. Her list included Steffen, Tim McDonald, Sree Sreenivasan, Ross Brand, Neil Parekh, Keith Keller, Tim Sohn, and Jim Fuhs. Go ahead and follow them to see their work in action.

Dana gave a shout-out to Bernie Fussenegger and his weekly Twitter chat, #Digital360Chat. Bernie always has a good gender mix in his guests.

A7. Bernie Fussenegger (@B2the7) & his #Digital360Chat come to mind. He had a mix of men & women but always treated people with respect. I met so many great folks through that chat, really miss it. #TwitterSmarter

Even our own #TwitterSmarter attracts a lot of men who support women. Come join us on the chat to be a part of the conversation!

A8: I don't have favorites but here are three (and 2+ becuz) that I've spoken with recently.@SamanthaAnderl@Carol_Stephen@MaikoSakaiBiz

There’s no short of excellent women to follow on Twitter. Check out these people and then join your favorite Twitter chats and Spaces rooms—you’ll meet a lot of like-minded and inspiring women.

Well, folks, that’s all from me this week. Thanks a lot for reading through and for more great insights from our chat with Rose, have a look at this Twitter Moment that Joana put together for us. If you think this summary is pretty good, you’ll love the real-time chat. Join us next Thursday at 1pm ET for #TwitterSmarter. We also hang out on Twitter Spaces at 5 pm ET to continue our chat. Catch you there! 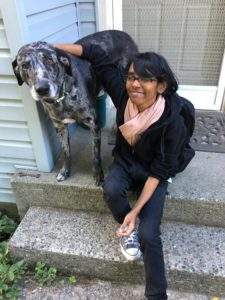 I write all the things—marketing stuff to pay the bills; haiku and short stories so I feel wholesome. A social media enthusiast, I hang out with the #TwitterSmarter chat crew, and am always happy to take on writing gigs.